It's not my first hanami ever (well, not really a "hanami" like in Japan... but considering it's hanami which literally means "flower viewing" -- hana = flower; mi = watch, see, view -- I could say that yes, it's hanami ). I went to see sakura years back in High Park, Toronto with my bestfriend, Tigin. 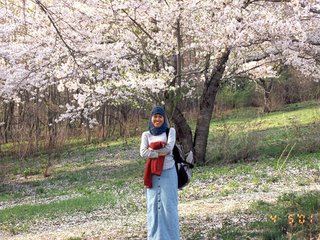 Yes, today I had a better hanami in downtown DC (got off at the Museum of Natural History to buy that cute "cherry blossom" t-shirt , then walked along the Mall towards Washington Monument and then end up at the Jefferson Memorial... such a loooong walk, eh?). It wasn't really a great day to view sakura... it was soooo overcast! I had to put my camera on "flash mode" all the time to get a better result... But it's cool 'coz I brought some spare batteries, JIC. Ugh, now I feel soooo tired. Both my legs are sooo sore due to such a looong walk today. I'm sooo out of shape ... mulai battala' karena keenakan tinggal di rumah. Oh well... it's time to start exercising again! :)

Yaty Yasir
I'm a Bugis lady, born and grew up in Makassar (formerly Ujungpandang), Indonesia... now living in the US with my beloved husband (David), a sweetie daughter Iman, and the light of my eyes -- baby daughter, Zahra Shirley. I am a happy and proud Bunda! I am a very happy, simple person in my happy, simple life :)

This is a Flickr badge showing public photos from Yaty Yasir Kearns. Make your own badge here.